SB2237 is a Lotus Seven Series 2, vintage 1967, first registered in Dudley UK in the beginning of 1968. Today it lives in Denmark. It has had various engines during its life but now is equipped with a pre-crossflow 1500 cc engine with one Weber 40DCOE 2 as when it was delivered. It has the original braced Standard 10 rear axle and the standard Ford 4-speed gearbox. 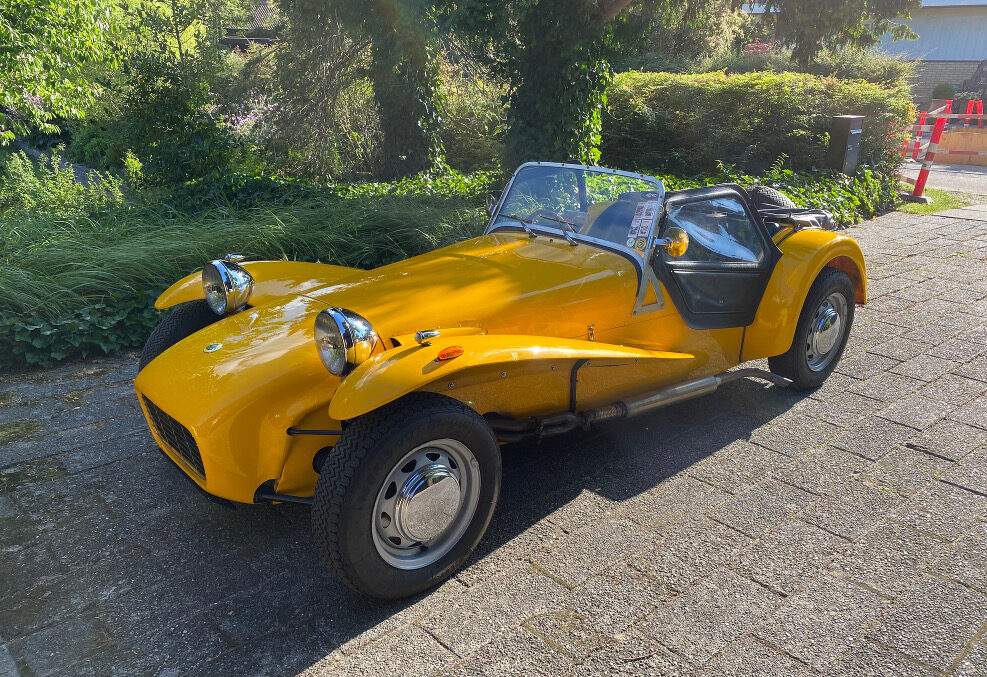 The car was restored in 1991-93 and has since been continuously amended and updated in order for it to be close to original specification while respecting its history and – within this framework – a fast and enjoyable Seven. We have established most of the car’s history and in the process have been in contact with a number of very helpful people with knowledge of the car, including Lotus Cars, the Lotus Seven registrar, previous owners, and other Lotus enthusiasts.

This site is about how we have gone about this. We hope you find the site of interest, and we welcome any help, input and exchange of views.

Please also feel free to visit our list of what we have found to be useful Seven links or send us a mail at lotus-seven(at)paetsch.dk if you have any comments or questions. 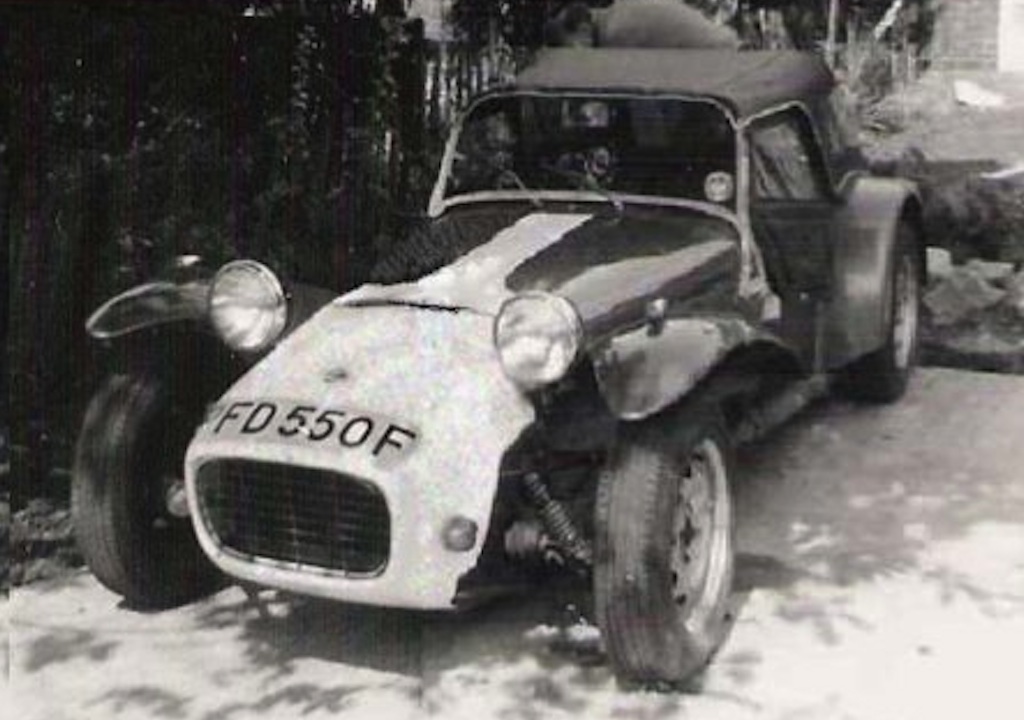 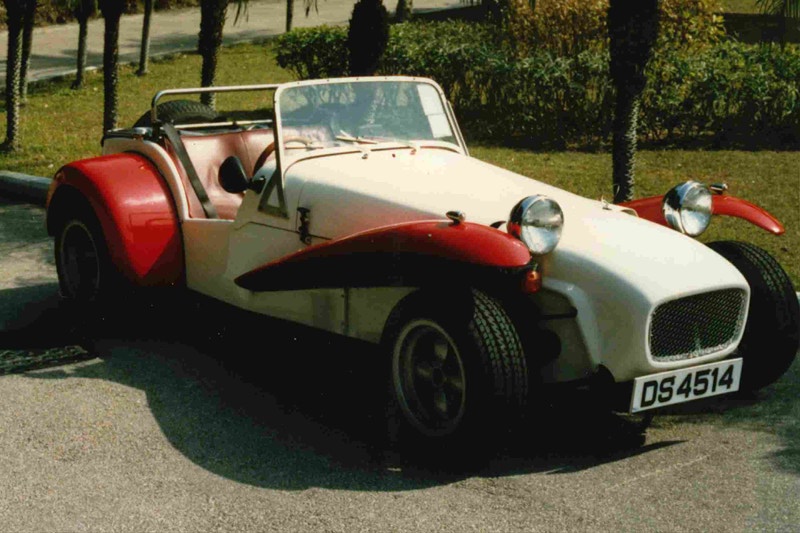 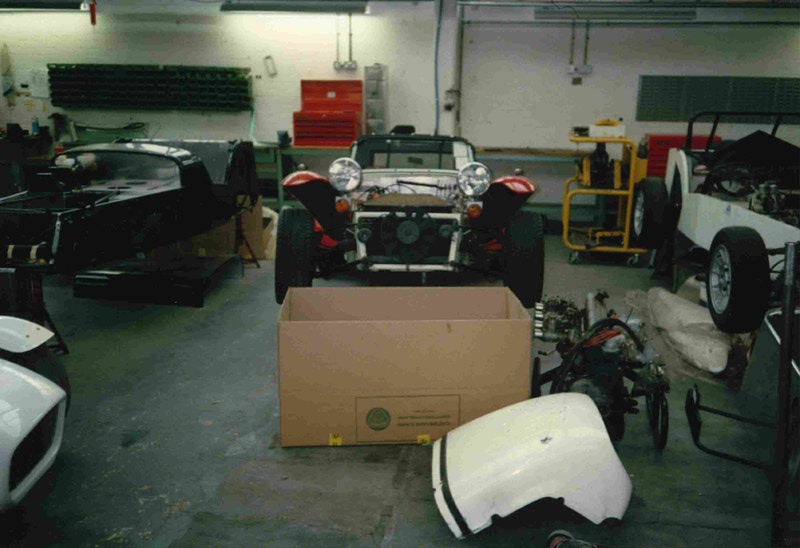 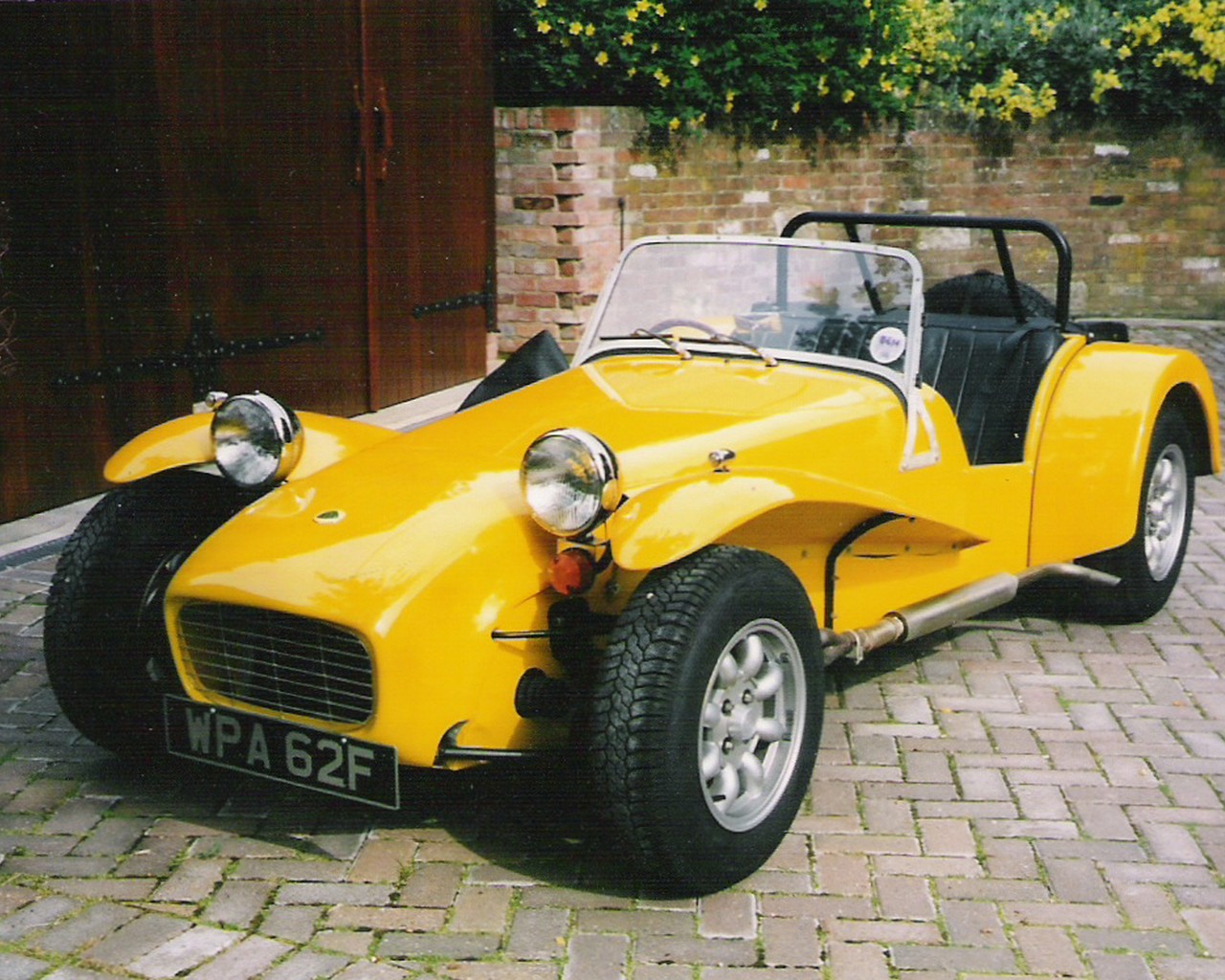 We had been considering switching tires as our 145/80 tires looked somewhat small. The Seven Series 2 was delivered with 520 x 13 tires, with a width of 14 cm and a diameter of approximately 58 cm. Our 145/80’s were not too far off regarding width but had a diameter of only approximately 56 cm, even with their relatively high 80 profile. Our narrow wings leave very little space for larger tires but we decided to give a set of 155’s a go. We had been quite happy with our Uniroyal RainExpert tires but stumbled on a set of Retro Classics that have a very contemporary look. The diameter of the 155/80’s is approximately 58 cm and they fit nicely within the narrow wings. 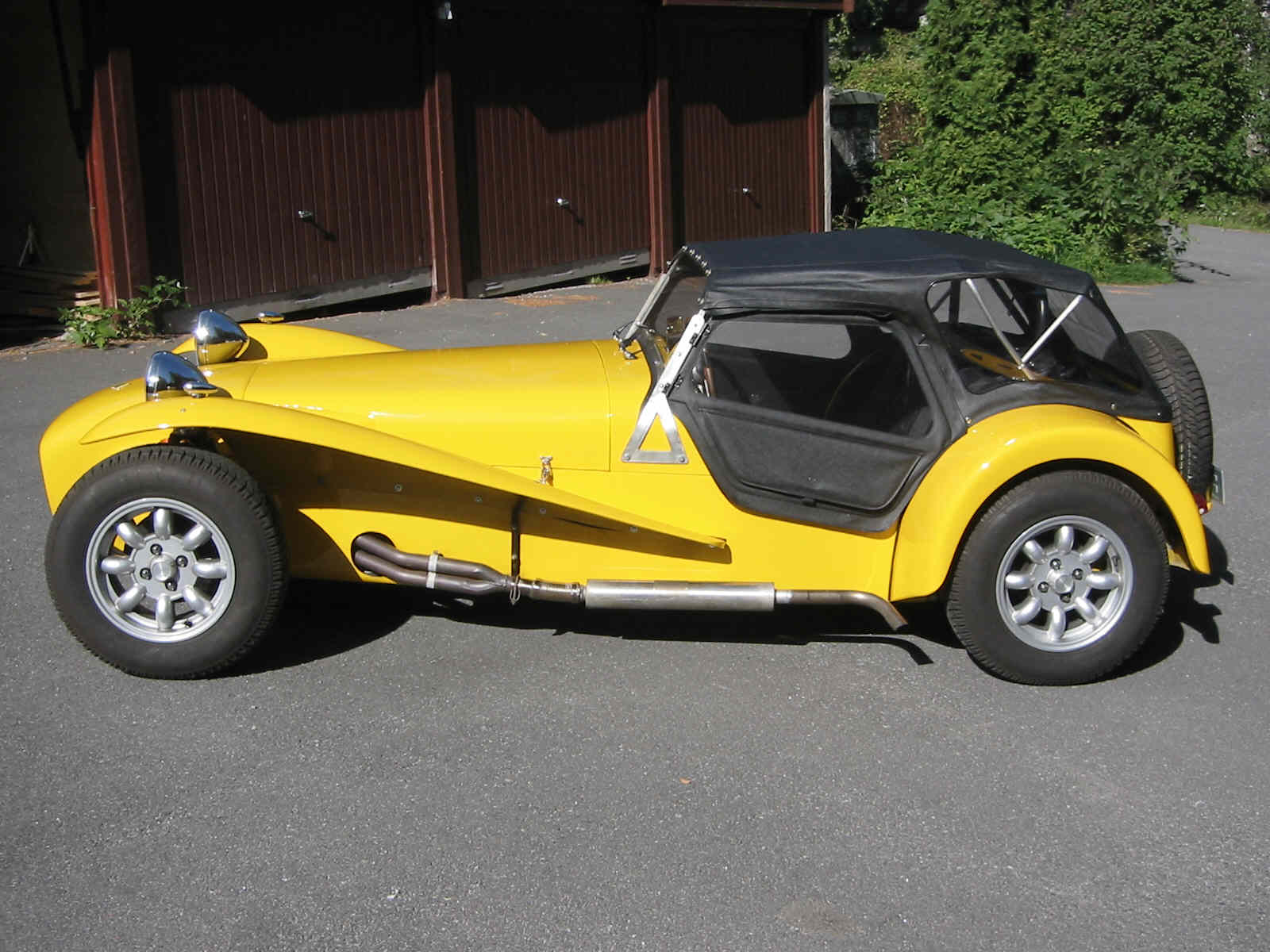 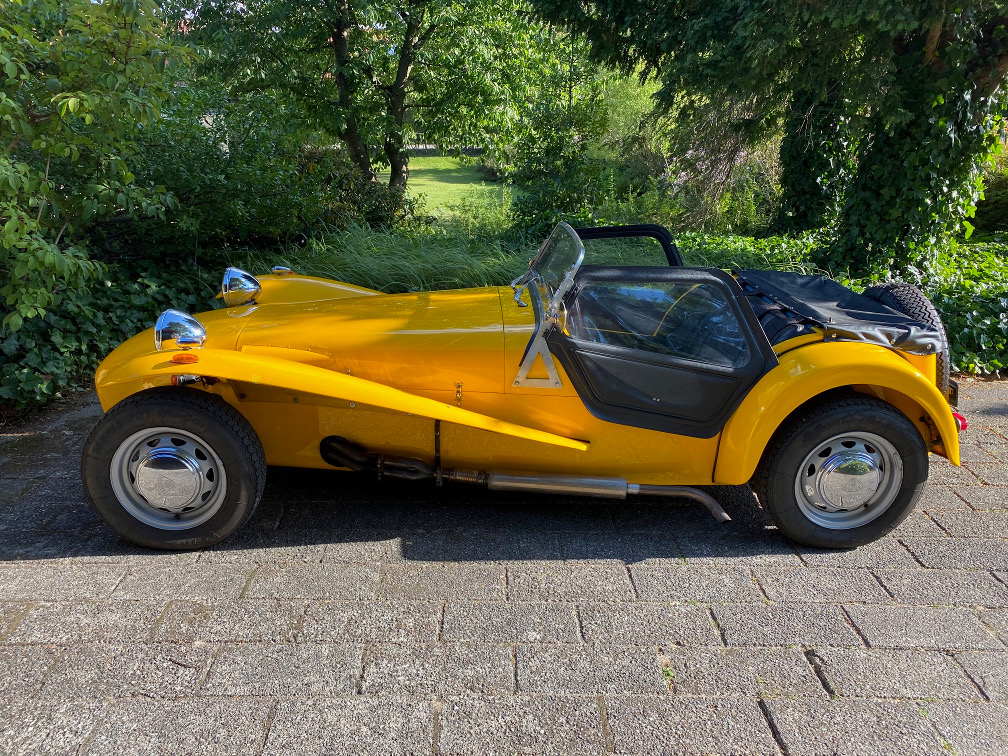 We are not sure whether our Seven had a roll bar when delivered. The one we have on the car was fitted when the car was restored in the 90es. 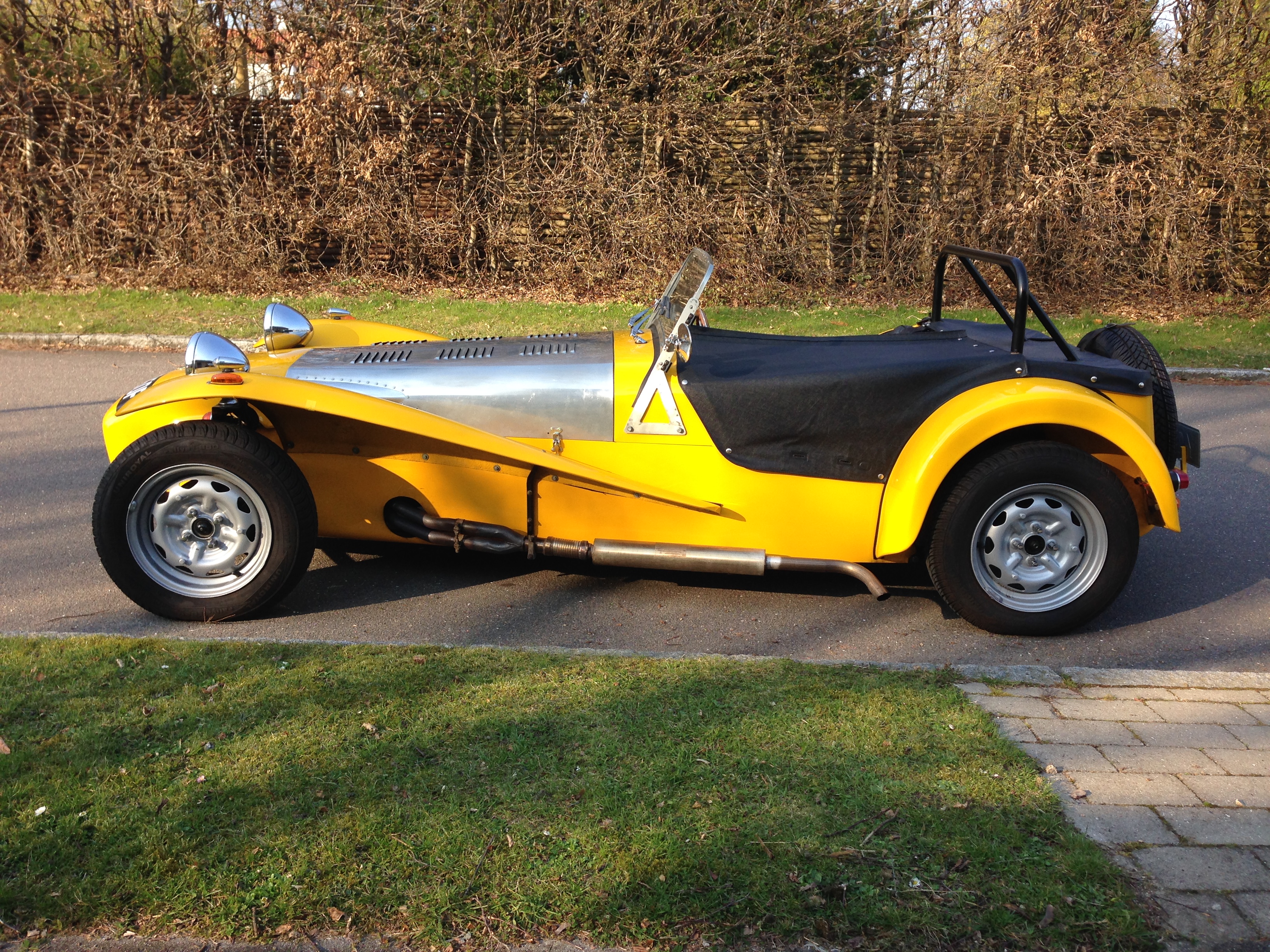 Besides the (debatable?) safety improvement of having one fitted, the roll bar is of course a topic for purists, as the look is more clean without and as most Lotus Sevens were not delivered with one.

For a long time we had been contemplating switching to narrow rear wings from the somewhat wider wings that were on the car when we acquired it. Opinions differ as to whether the narrow rear wings are actually too narrow, even when using wheels and tires in line with original specifications.

A common ‘trick’ back in the 60es seems to be to simply cut away part of the rear wing edge, which can actually be seen on the 1968 picture of SB2237 with Elan wheels.

Having changed from wider Minilites to Elan wheels and also fitted narrower tires, the wider wings did look a bit odd. 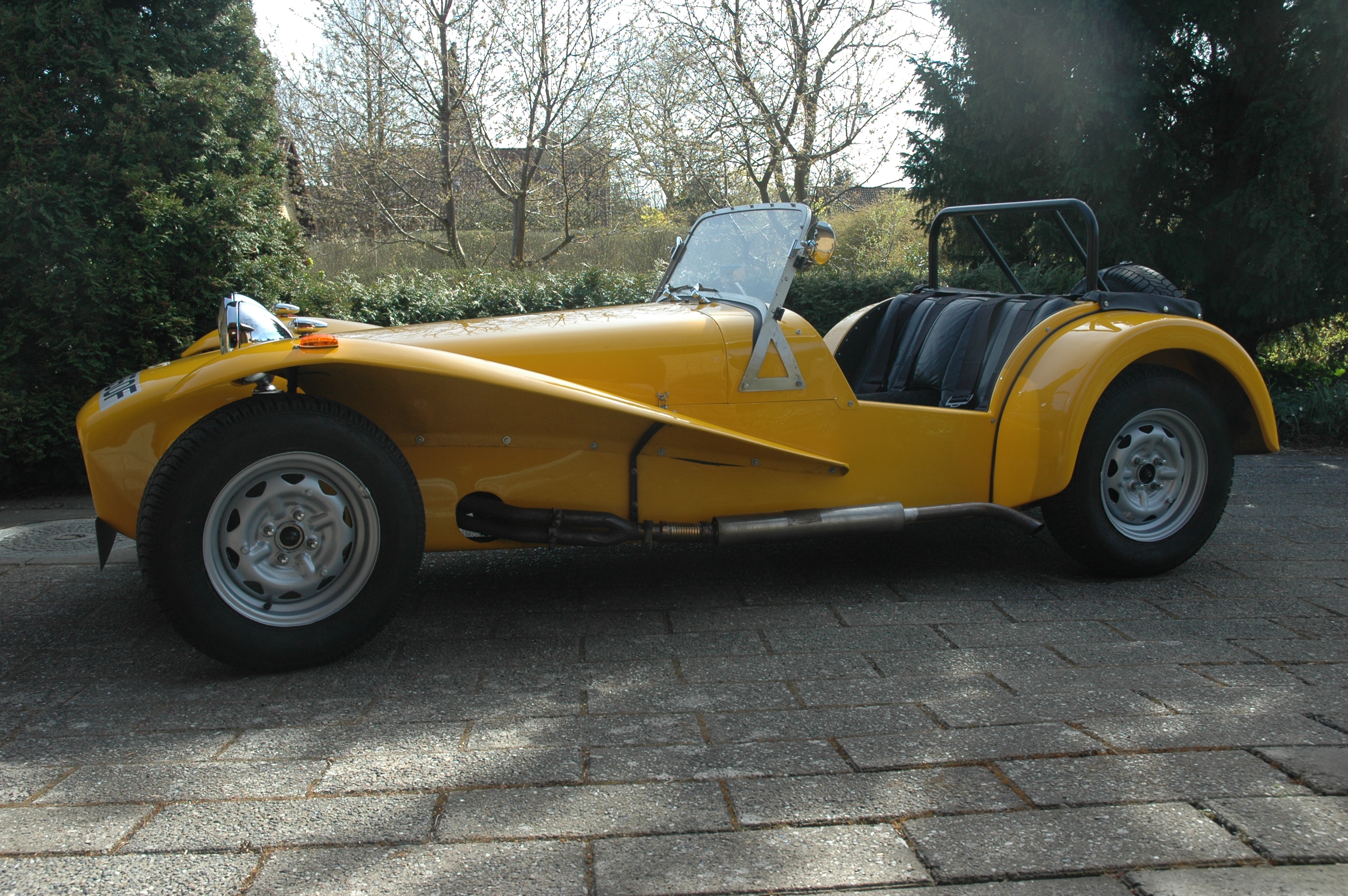 So we decided to give the narrow wings a try. We sourced new wings from Redline and we are quite happy with the result. 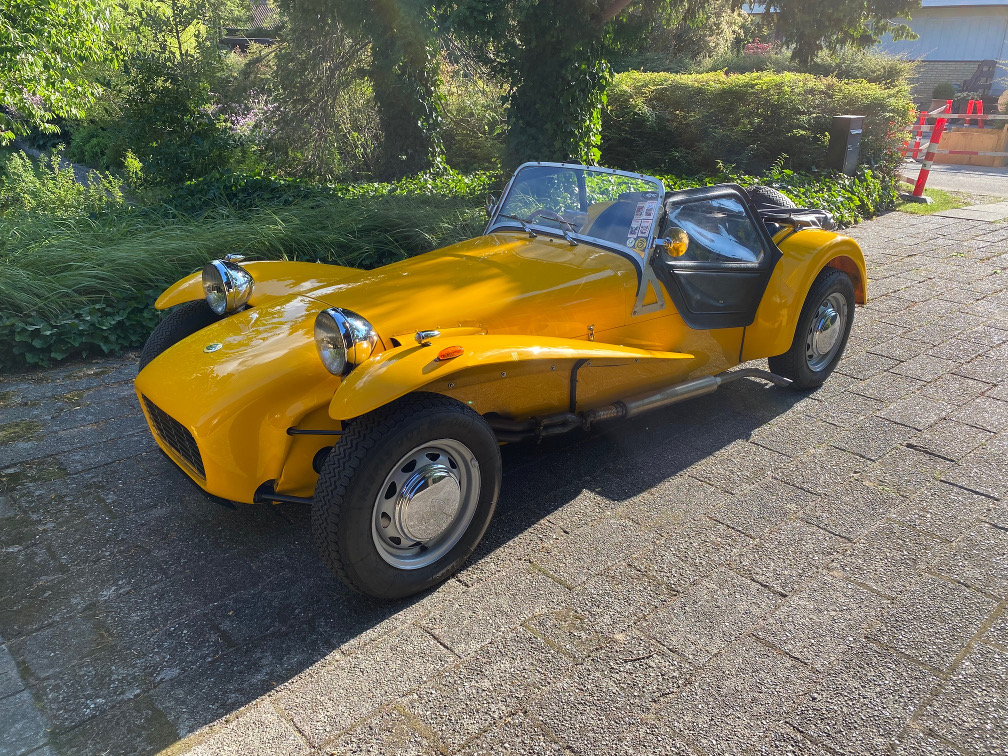 The Standard 10 rear axle of the Lotus 7 Series 2 is probably the most controversial component of the car. Colin Chapman’s concept of a lightweight, live axle with a simple A-frame to provide longitudinal and lateral guidance gives a performance that is close to an independent suspension. The concept is brilliant, but its implementation is doubtful. Had the axle been suspended the way it was designed for, no doubt it would be capable of handling the most powerful Series 2 Sevens. However, Colin Chapman’s concept supports the axle in a manner it was never designed for, leading to frequent failures, even on the not so powerful cars. One problem is that the suspension introduces large torsional loads on the axle casing leading to cracks and oil spillage, and subsequently seizure of the differential. The addition of the Thesaurus plate helped that problem to some extent. 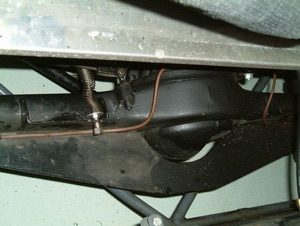 To make things worse, the concept introduced large local loads where the A-frame is attached to the lower part of the differential casing. This led to a crack in SB2237’s casing as far back as in 1968, according to a previous owner. The crack was braze welded and doesn’t seem to cause any problems. 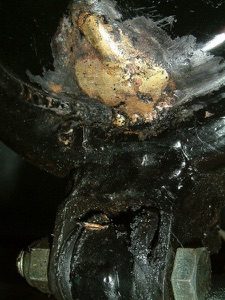 We treasure our Standard 10 rear axle which has caused no trouble since we bought the car. We inherited a minor problem caused by bad shimming  of the half-axle making it difficult to fixate the left rear hub. This problem was solved by our Lotus mechanic.

With our engine and tire selection we do think that our Standard 10 rear axle will survive.

We have learned from an early owner that SB2237 was originally delivered with a pre-crossflow engine with one Weber 40DCOE 2. During its life, the car has been equipped with a number of different engines, including Holbay and Cosworth racing trims. 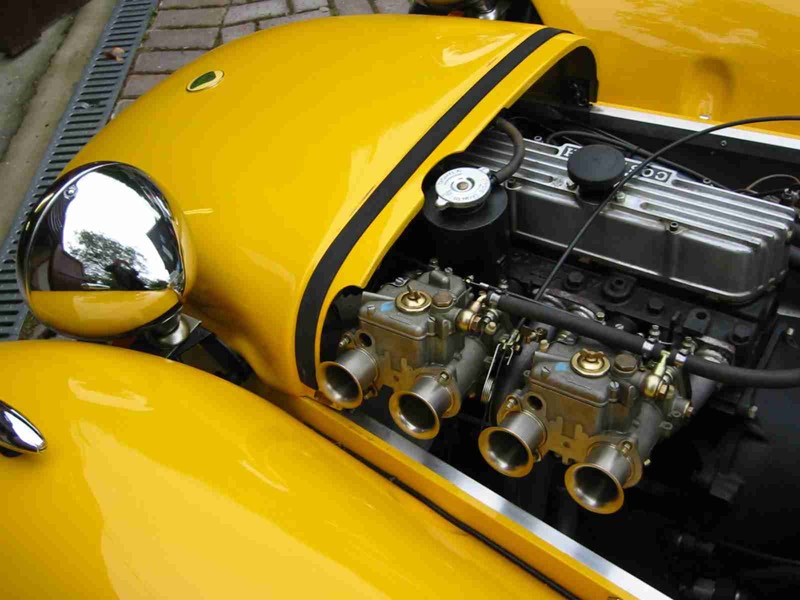 Today, it is again equipped as when it was delivered, with a 1500 cc pre-crossflow engine and the single Weber mounted on the original Lotus alloy inlet manifold. The Lotus manifold was kindly provided by a previous owner. 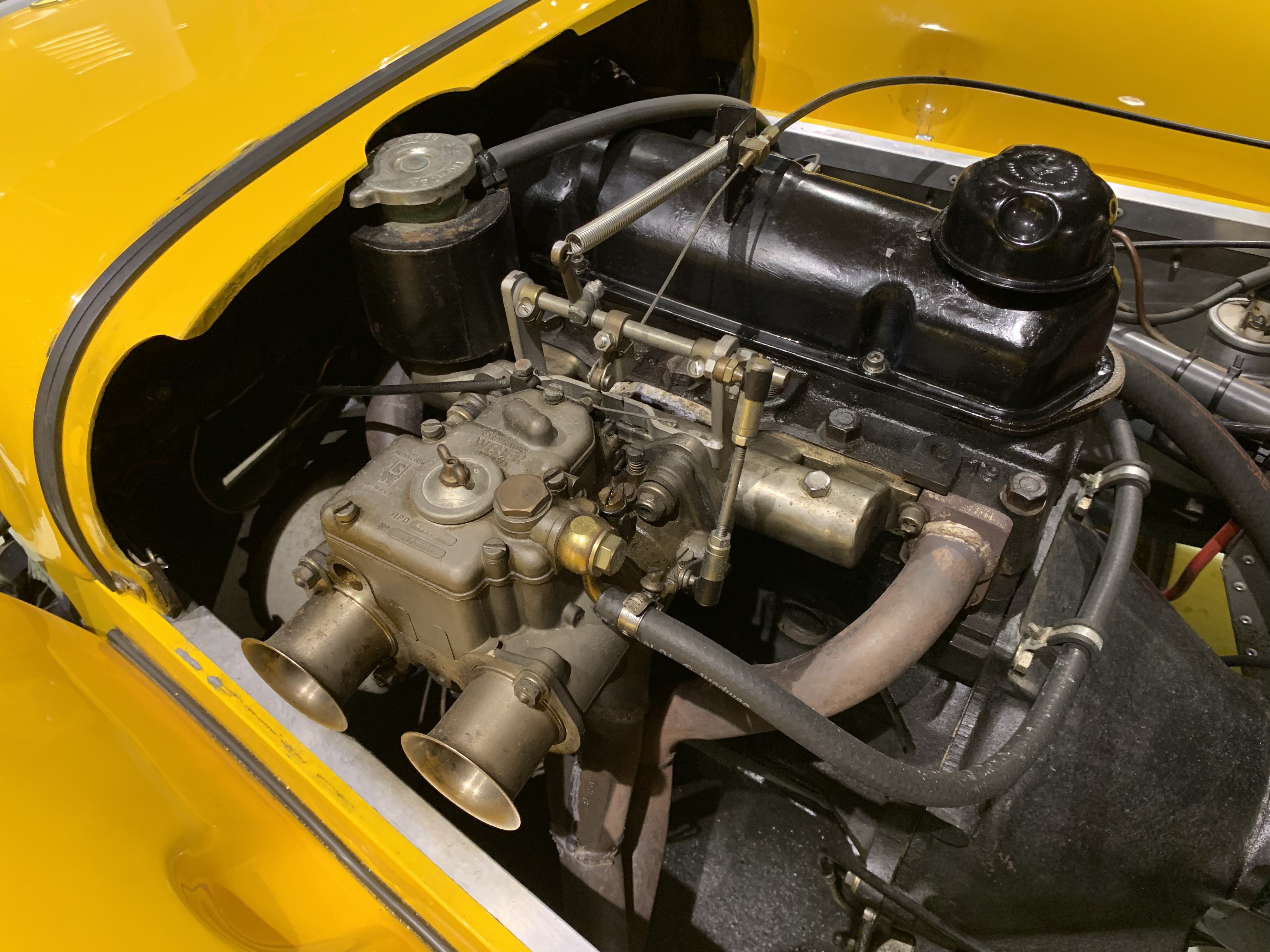 The performance of the basic engine is moderate, 66 HP at 4600 rev/min. Therefore, the ports of our engine have been enlarged and the combustion chamber has been flowed moderately. Also, humps and edges in the inlet manifold have been smoothed out and the exhaust is 4-2-1. Most importantly, the engine is equipped with a GT cam.

With the 0.06″ overbore our data show a power output of some 80 HP at 5200 rpm. Not a high revving engine but an engine with good midrange torque.

With this setup up the car is lively and has no hesitation during acceleration.

The steering wheel was donated by Caterham Cars during restoration and we have been told it came off a Lotus in the Caterham historic collection. The wheel was custom built for Lotus by Moto-Lita probably in the 50es. We would be most interested in hearing from anyone who knows more about this steering wheel – including which car it came off. 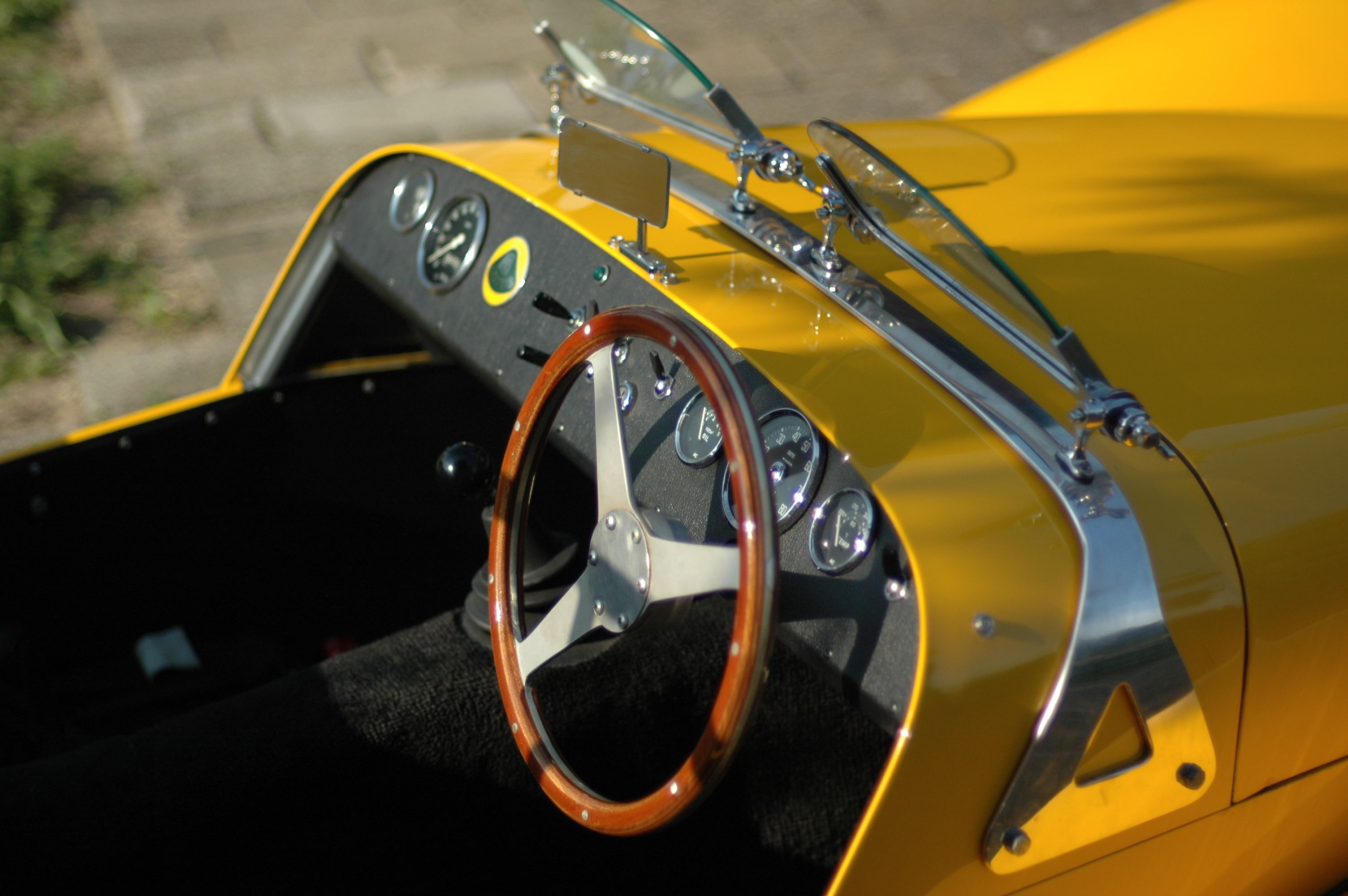 When we bought the car the instruments were not original but would pass as period and the original lay-out of the dash had been kept. We have through the years changed the instruments to new (old) ones to original specification.

With their leather trim and almost comfortable shape, the seats on SB2237 are far from original specification. Apart from their nice look and feel, as they were made by an upholsterer in Hong Kong they are a part of the car’s history. 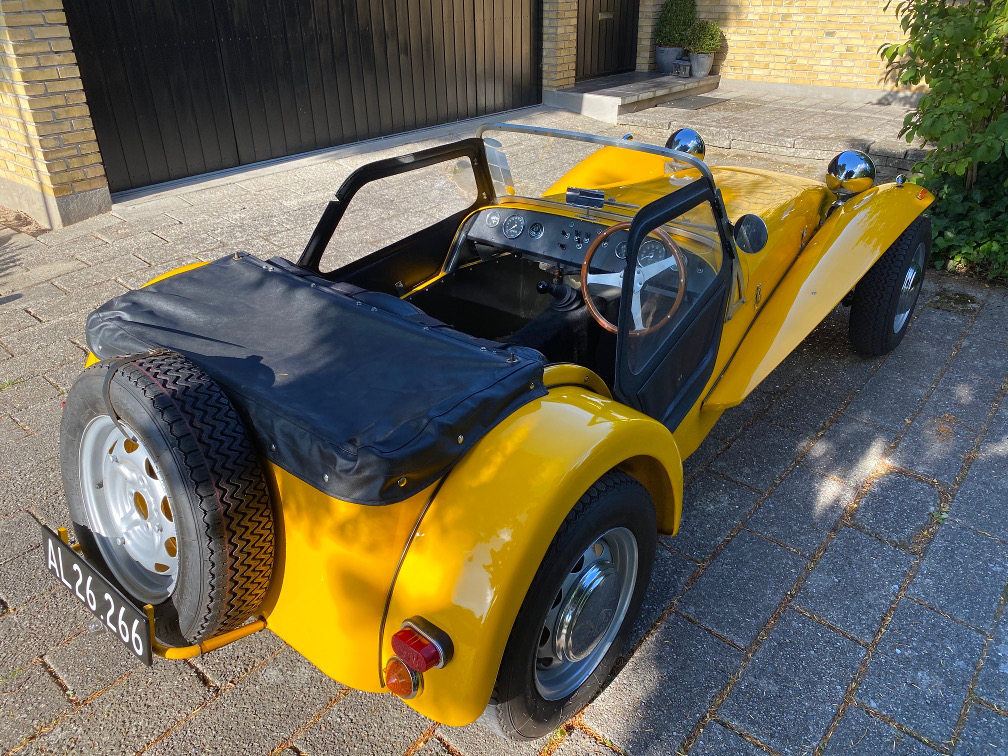 As can be seen on the pictures, not only the seats, but also the dash, side panels and piping are black. Although this is somewhat unusual for an S2 it was how some of the late production S2s were delivered.